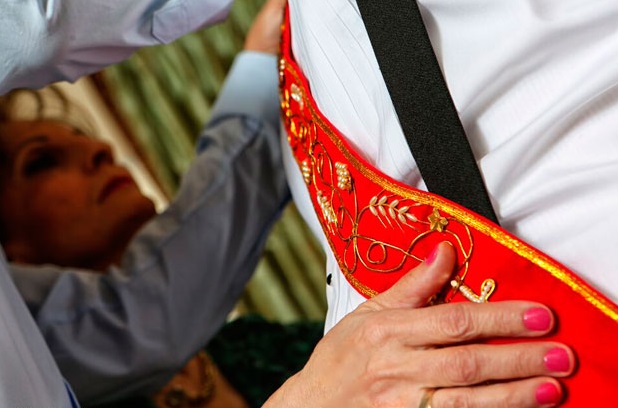 At Imperial Banquet Hall & Wedding Venue, we are no strangers to large ethnic wedding and unique cultural events. Armenian weddings, with their vibrant traditions and extravagant receptions, hold an especially special place in our hearts, and to commemorate the Armenian couples who will celebrate their nuptials at Imperial this year, we’ve decided to share some of our favorite things about this exciting cultural event.

Like in the U.S., it is customary to ask the bride-to-be’s hand from the woman’s father; unlike in the West, however, this is typically done at a formal dinner with members of both the bride’s and groom’s family in attendance. This dinner, called either a Khosk-Kap or Khosk-Arnel, depending on the level of formality, includes gifts of floral arrangements, chocolate and cognac, tea service, and a priest to bless the engagement rings and the couple’s plans for marriage.

The Night Before the Wedding

The night before an Armenian wedding, tradition dictates that the groom’s family bring decoratively wrapped gifts of chocolate, Armenian cognac, perfume, flowers, and the shoes the bride will wear to the bride’s family’s house. During this time, the bride’s home is also decorated with family photos and food is prepared for the following day’s events.

On the morning of the wedding, the bride and the groom each get ready in their own houses; the groom’s house typically has music playing and appetizers are served to the wedding party, while the bride gets ready in the comfort of her own home, surrounded by photos of her family members and bridesmaids. Some of the most interesting wedding traditions include:

Limited dates available for events in 2021 and 2022. Inquire for pricing and schedule in person touring today.